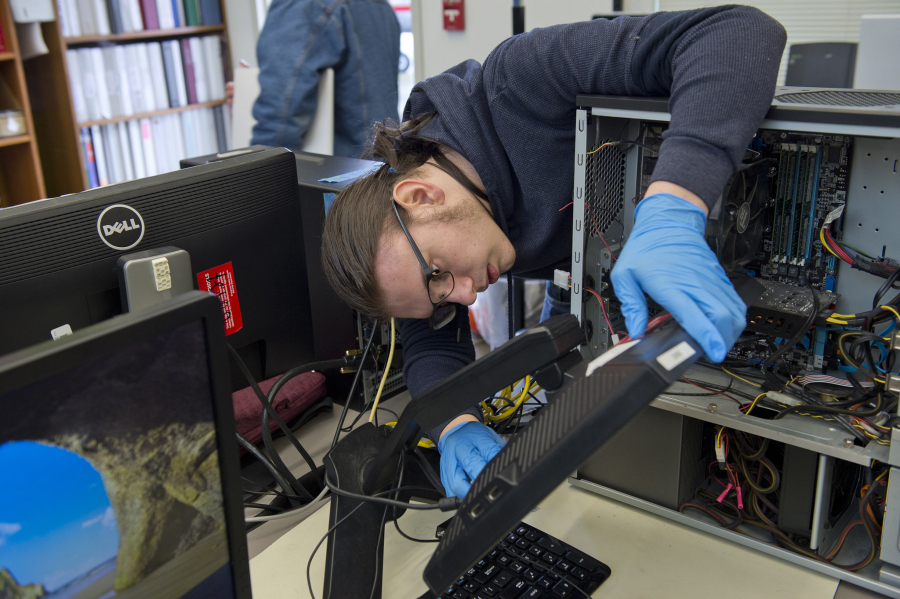 Where do electronics go when they die?

First, they’re boxed up and stored in attics, garages and basements. After collecting dust, they’re thrown away or recycled. If thrown away, they end up in landfills, incinerators and oceans, where they pose a risk to the environment.

If recycled, however, they’re repurposed. Individual parts are collected and reused. Non-reusable parts are disposed of safely. And as was the case on Saturday morning at Cascadia Technical Academy, recycled electronics are used as educational tools for IT students.

On Friday and Saturday, Cascadia Tech held a community service electronics recycling event where anyone looking to recycle their old electronics was invited to drop them off at Cascadia Tech, where IT students repurposed and recycled them for free.

This year marks the 10th anniversary of the event, and this was the busiest one yet, according to IT instructor Ray Nelson.

“Yesterday we had a stream of cars, and every single one of them was loaded,” he said Saturday morning. “This has been our busiest recycling event ever.”

Those vehicles were loaded with computers, monitors, mouses, keyboards, tablets, iPods, phones, smartphones, printers, circuit boards, speakers, gaming consoles and everything in between. They came from individuals, businesses, churches and more.

“We usually get about 5,000 pounds of stuff each year,” Nelson said. “The waste is one of the hardest parts about our industry, so if we can divert 5,000 pounds every year, we’re grateful to do so.”

On Saturday morning, 18 students were bustling about in a large room filled with old devices. Computers and monitors covered every table. Cables littered the floor. Students were busy testing what worked and what didn’t.

“We test everything to see if it works,” Nelson said while walking through the room, intermittently answering students’ questions. “We’re building troubleshooting skills. We’ve trained the students to build stuff, and now we have a lot of things that have issues that are hard to replicate. We work through all that here. It’s a part of the process.”

By Saturday morning, Nelson had already delivered two van loads and a truck load of non-usable electronics to Earth Friendly Recycling. One van was filled entirely with monitors, the other with printers. Later Saturday, students were filling the van with more monitors and printers.

“We get a lot of printers and monitors because people tend to get rid of those when they upgrade their electronics,” Nelson said.

Part of what makes the event a great learning opportunity is that students are allowed to make mistakes. If something breaks, there’s no financial loss. They can recycle it and move on to the next item. In the process, they learn the ins and outs of many devices.

Some of the students were seeing things they had never seen before, like rotary phones, old gaming consoles, zip drives, a Betamax player, reel-to-reel tape recorders, Walkmans and more. A whole rack was set aside filled with old and unique electronics that Nelson called the “history wall.”

“The students get jazzed by some of the older stuff that comes through,” he said. “Part of the reward of this is that someone’s junk is our treasure.”

One such student was Ethan Rathke, a junior. He was excited when he found a working Gameboy and two computers from the 1980s that he wanted to work on.

“We’ve had a lot of old stuff come in that we’ve had to kind of work around and learn how to configure,” he said.

Rathke is a member of SkillsUSA, a career and technical student organization. He will soon participate in a state computer-maintenance competition in Tacoma, and working at the recycling event was helping him to prepare.

“This has helped me a lot for computer maintenance because I’ve been taking apart computers and kind of figuring them out,” he said. “So, for actually troubleshooting and a lot of that stuff, it’s helped a lot for me to kind of figure out the process of it.”

Another student excited about some of the old technology was Ethan Zanoli, a senior.

“I’ve always been heavily interested in is tinkering and messing with any form of electronics,” he said while inspecting a Sony PlayStation 2. “I think the earliest memory I have is of 5-year-old me taking apart an RC car I got for Christmas. I ruined it in about 20 minutes.”

Zanoli said he was learning a lot about building, maintaining, updating and troubleshooting computers by helping out at the event.

“We’ve gotten a lot of quirky things,” he said. “Anything could come through that door.”

IT students at Cascadia Tech are accepting electronic donations throughout the school year. Drop-off dates will be the first and third Fridays of every month during the 2021-22 academic year.

Cascadia Tech does not accept appliances, TVs, Styrofoam or batteries. Email ray.nelson@evergreenps.org with questions about donation items or an alternative drop-off schedule.